Capitan de Navio Fernando Villaamil commanded the division of destroyers, and was on board the FUROR at the naval Battle of Santiago. He lost his life in action during the battle, being the highest Spanish officer to suffer this fate. 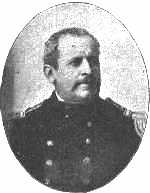 Fernando Villaamil Fernandez-Cueto was born in the family ancestral home in Serantes, near Castropol, in the north of Spain, on November 23, 1845. He was the third of the eight children of Fermin Villaamil y Cancio and Rosario Fernandez-Cueto Roza, whose house and surrounding properties spread over a little valley, less than a mile from the Bay of Biscay coastline. The Villaamils had for centuries been respected noblemen and landowners, but Fermin Villaamil was a lawyer and very involved in the political fights of the Spanish nineteenth century and in endless litigations, to the point that, by 1868,  he found himself almost completely ruined, and had to sell all his property in Serantes, including the house.  It seems that these events produced a strong mixedfeeling of both affection and grief about his native region in Fernando, which would last for the rest of his life .

At age eleven Fernando began the courses at the "Nautical and Commercial School" in Ribadeo, and, after enhancing his mathematical skills, hepassed the examinations to enter the the Spanish Navy's "Colegio Navalde San Fernando" on July 1, 1861. Less than one year later, on June 23, 1862, he went, as midshipman, aboard the frigate ESPERANZA, the first of the long series of warships on which he would serve his nation until the final FUROR.

One year later on November 7, aboard the frigate VILLA DE MADRID,Villaamil reached the new world for the first of what would be many visits, landing at Havana, Cuba. On May 15, 1864 aboard the steamer ISABEL LA CATOLICA, he received his baptism of fire during the operations of landing the Spanish expeditionary forces in Santo Domingo. In 1867 he was promoted to Alferez de Navio and sent to the Philippines,where, in 1870, he was given his first command, the gunboat BOJEADOR.

The following year, while involved in a struggle with  Chinese pirates in Parang, Boal and Jolo, he was again promoted, this time to Teniente de Navio. In December, 1873, after five months at sea aboard the frigate CONCEPCION, Villaamil was again in Spain and was nominated as a teacher in the Naval School, which the Spanish Navy held aboard the frigate ASTURIAS, anchored in the naval base of El Ferrol in the northwest end of Spain. While there, in 1876, he married Julia Cancio Villota, daughter of a well-to-do civil servant who had spent several years holding important positions in Cuba and then in Madrid. During these years Villaamil took advantage of the studying and writing opportunities presented by his new job, and was perhaps aided by the high level connections of his father-in-law. He became one of the best known and respected Spanish Navy officers, both in the political circles as well as in the press.

On April 26, 1884, Villaamil was appointed second officer in theMinistry of the Navy. As such, he was in charge of the study and design of a new class of warship intended to fight the then-new torpedo boats.Once he reached his conclusions on the subject, he obtained theagreement of the Minister, Admiral Pezuela, and selected the shipyardsof Thomson in Clydebank, Scotland, to build the new vessel, beginning in late 1885.  Villaamil was assigned to Great Britain to supervise the works and study the operating procedures of the British naval dockyards, as well as the new Engineers corps. On January 19, 1887, the DESTRUCTOR, the first torpedo boat destroyer, was formally handed over to the Spanish Navy, with great expectations from the European naval comunity. On the 24 the ship, which had reached 22.5 knots in the trials, weighedanchor in Falmouth, bounded for Vigo, with Villaamil in command. Twenty-four hours later, the DESTRUCTOR reached the Spanish coast, making 18 knots through a stormy Bay of Biscay. In one day the doubts about the vessel's seaworthiness were answered forever, and her designer and commander had every reason to feel proud.

As a consequence of the success of the DESTRUCTOR, Villaamil's professional reputation grew, both in Spain and abroad. He and his shipwere the center of attention in every harbour they visited, and even the Regent Queen, Maria Cristina, went on board the vessel in San Sebastian in the summer of 1887. From then on, the Queen payed particular attention to Villamil's exploits, and on several significant occasionsreceived him personally to learn his views on various subjects.

While in Great Britain, Villaamil, who was a strong advocate of  oceanic sailing as the best training for the young Navy officers, looked for a suitable sailing ship to purchase. Eventually he took the opportunity of buying a well-shaped clipper, the CARRICK CASTLE, built in Glasgow in 1866, for less than the freight cost for a full load of military supplies for the Spanish Navy. He purchased the clipper, carried the supplies to Spain, and saved significant money. Once on the Navy list, the training ship was classified as corvette and named NAUTILUS. For a few years she was based in Cadiz, sailing only short cruises until, in1892, when Villaamil was asigned as her commander. He convinced the Minister to approve his plans for a cruise around the world.

On November 30, 1892, in the trail of the celebrations of the fourthcentenary of America's discovery, the NAUTILUS left El Ferrol. LasPalmas, Bahia, Cape Town, Port Adelaida, Sydney, Port Lyttelton,Valparaiso, Montevideo, San Juan de Puerto Rico, New York, Plymouth and Brest were the ports of call on that forty thousand mile cruise, which ended on a shining Sunday, July 16, 1894, in San Sebastian. Here the sailors suddenly realized that an approaching launch hoisted the royal pennant. This was the Regent Queen and her son, the child King Alfonso XIII, coming to board the NAUTILUS.

The world cruise increased Villamil's popularity even more. He publishedthe story of the voyage in an excellent book in which he not only reported on the events of the cruise, but also on his thoughts on manythings he found around the world. His comments on the comparison between British and Spanish colonies are impressingly meaningful and well-written. One cannot avoid a thrill when reading Villaamil's reflectionsafter visiting, in May 1894, the Cramp shipyards in Philadelphia, where two battleships and three cruisers were in different stages of construction. He wrote "I don't know what are the goals of this country, [...] but I realize that in the last few years, in an unexpected way, itis getting the most advanced and powerful warships." Indeed, he did not know that his destiny would make a fatal appointment with those impressive warships  four years later, at Santiago de Cuba, annihilating him, many of his sea-fellows, all their ships and the last remains ofthe Spanish Empire.

In 1895 Villaamil was appointed to head the investigation into thecauses and circumstances of the loss of one of the most powerful Spanish warships, the cruiser REINA REGENTE, which had disappeared in a gale while crossing the Strait of Gibraltar from Tangier to Cadiz. Theresults were given in a report whose authors, Villaamil and his colleague is José María Castellote y Pinazo, showed the highest degree of professionalism and nautical skill. During the following two years, Villaamil and some other forward-thinking colleagues tried, rather fruitlessly, to make the Spanish public aware of the critical deficiencies of the Navy.

The year 1898 came. On February 16, the day following the explosion of the MAINE, Villaamil was appointed as chief of the first division of torpedo boats and destroyers. While a totally unrealistic feeling of unbeatable naval power spread over Spain, events rushed ahead. A fleet, commanded by Admiral Pascual Cervera was to be sent across the Atlantic. On March 13 Villaamil's division, composed of three destroyers, TERROR, PLUTON and FUROR, three torpedo boats, RAYO, AZOR and ARIETE, and a merchant steamer, CIUDAD DE CADIZ, for support, left Cadiz. A few daysbefore, in Madrid, Villaamil had been received by the Regent Queen. On April 18 the entire fleet gathered in the Cape Verde islands. On April 24, Spain declared war on the United States, and Cervera received the order to go to the Antilles. The three torpedo boats were to go back to Spain, and the destroyers integrated in the fleet, leaving Villaamil, with no specific responsibilities. He could have returned to Spain, but totally aware, as were his colleagues, of the disaster they were headed for, he chose to go forward with them.

The rest is history. Francisco Arderius, officer in the FUROR, reportedthe end: "[after several gunshots that caused tremendous damage and many casualties] Capitan de Navio Villaamil went up to the prow gun platform;when I was about to follow him, a grenade exploded there [...]. I couldonly see a flood of blood coming down. [...] Shortly after we went overboard, the ship, already on fire, sunk with the lifeless body of DonFernando Villaamil".

On July 24, 1912 a memorial to Fernando Villaamil was inaugurated in Castropol. It had been erected by popular subscription; the first contributor being Her Majesty the Regent Queen.