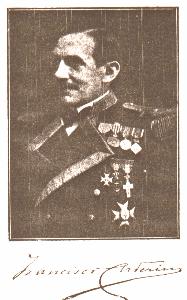 Francisco Arderius Rodriguez was born in Madrid on 1 December 1870. He joined the Spanish Navy Accademy in 1889, ranking number one in his class. During his life, he was the author of many notable literary, scientific and navy works.

In the naval Battle of Santiago naval battle he showed great courage and bravery, fighting by the side of Rear Admiral Villaamil aboard the Torpedoboat FUROR. Aboard the FUROR, Francisco was Villamil's executive officer. During the battle, he seriously injured, and was sent to the United States as a prisoner of war until the Treaty of Paris was signed, ending the war, on December 10, 1898. Following the war and his repatriation to Spain, he joined the Invalid Corp, rising to the rank of Colonel.

Francisco married Clotilde Perales Ansina in 1900. She gave him four sons, three of them entering the military: Alfredo, Captain of an Infantry Legion and who died in the Spanish Civil War in 1936; Francisco, a cavalry colonel, and Antonio, a Naval officer.

During his career, Francisco Arderius Rodriguez was decorated with the Cross of  Saint Ferdinand for his service in the Cuban Campaign of 1898, the highest military decoration in Spain. This was only one of his many decorations. The others included:

1894 - The Naval Merit Cross, First Class, with white distinctive for Her Majesty birthday.

1896  - The Naval Merit Cross, First Class, with red distinctive, for the  honourable mention in dispatches of the gunboat "SANDOVAL and ALERTA in Cabañas and Reistigueví ports in Cuba.

1909  - Commemorative Medal for the Zaragoza sieges.

1910 - Commemorative Silver Medal with purple distinctive for the Gerona sieges.

Below is a listing of several books written by Francisco Arderius Rodriguez:

Return to the Furor Page