To designate his regiment to his men and others, an officer wore a collar insignia on the collar of the officer's tunic. The example below is from the 32nd Michigan Volunteer Infantry. By regulation the insignia was to be one inch high and of gold, gilt metal or of gold embroidery. This example is meant to give the appearance of a gold embroided insignia. The crossed rifles indicate infantry (crossed sabers would indicate cavalry, and crossed cannon barrels would indicate artillery). Similar to the hat insignia, the number indicates the regiment. By regulation, below the crossed rifles is the state designation.  In this case, we see "MICH" indicating Michigan. This particular example was found among the belongings of Dr. Arend Van der Veen who had served as a surgeon in the Civil War. 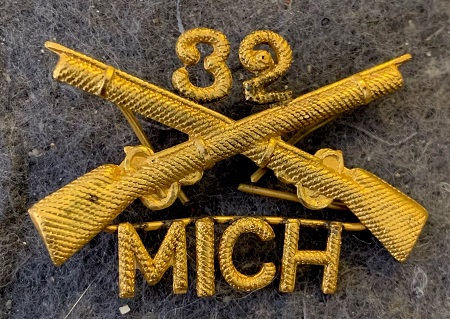 Return to the American Uniforms page

Return to the Uniforms page