(or Why was the MAINE in Cuba) 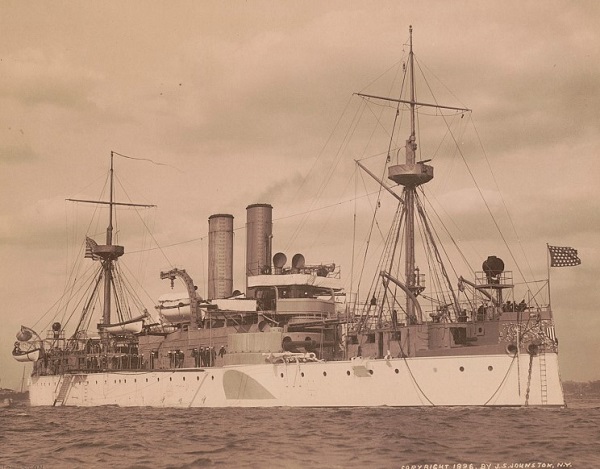 The Battleship MAINE at anchor, looking much like she did in hee final hours (Library of Congress)

The explosion of the USS MAINE, a second class battleship, in the harbor of Havana, Cuba, resulted in a large loss of American lives. Relations between the United States and Spain were already strained, and the loss of this vessel brought the strain to the breaking point. This event, more than any other, was the immediate catalyst for the outbreak of the Spanish-American War.

Why was the MAINE in Cuba to begin with?

For some time, the United States government had been applying pressure on the Spanish government to end Spain's policies directed toward stopping the Cuban forces fighting for independence. The American newspapers contained stories of atrocities and horrors resulting from Spanish General-Governor Weyler's policy of Reconcentration in Cuba. This policy called for the civilians in the country to be brought into the cities. The relocated civilians were not allowed to bring food with them, their cattle were taken by the government, and their houses burned. The goal of the Reconcentration policy was to keep the Cuban population from aiding the Insurgents with intelligence, supplies, food, and volunteers. The action could also weaken the resolve of some Insurgents who families were threatened by the decree. The result of the decree was devastating. Either by poor planning or by design, the concentration points were ill-equipped to handle the influx of refugees. Starvation occurred, and epidemics broke out. Tens, and maybe even hundreds of thousands of Cuban civilians died. The stories of these losses were even further magnified by the American press. With the assassination of Spanish Prime Minister Antonio Canovas, Weyler, who had the support of Canovas, was forced to resign. He was replaced by the more moderate Governor-General Ramon Blanco. Blanco eventually revoked the Reconcentration decree, but, by that time, war was inevitable.

As American public outrage with the Reconcentration policies and the reports of widespread death grew, calls for intervention by the United States grew within America. With the tense situation, outgoing President Grover Cleveland suspended the practice of having American Naval vessels visit Cuban ports, so as not to provoke either the Spaniards or the Insurgents.

One of the people strongly advocating intervention was the United States Consul in Havana, Fitzhugh Lee. Lee was no stranger to war, having served as a major general in the Confederate Army during the American Civil War. The beliefs of the new American president, William McKinley, though also an officer in the American Civil War, contrasted with those of Lee. McKinley believed that Spain would eventually make the changes necessary, give Cuba more autonomy, and stop the bloodshed through political pressure and negotiation. McKinley sincerely detested war, and was determined to keep the nation out of war during his presidency.

Lee's reasons for advocating intervention went beyond his concern for the Cuban people. He also believed that the lives and property of Americans in Cuba were in danger. The Spanish seemed to lack control over the actions of their own military. Also, the Insurgents were burning fields of sugar cane, many of which were owned by American interests. He lobbied for a resumption of the visits by American naval vessels, believing that this would increase stability, or at least show a strong American presence and a will to protect American lives and property. On January 12, 1898, protests broke out in Havana and the offices of four newspapers were attacked. The protests were actually an action by  some officers in charge of the Cuban "Voluntarios," or home guard, who were angered by anti-Weyler editorials that were printed in the newspapers. Lee claimed that these serious protests were full-scale riots and were evidence of the prevalent and dangerous anti-American feeling. Lee also claimed that the protests showed the instability within the Spanish military. The protests, in reality, had not been directed towards the Americans. Though it may have appeared that the Spanish military was losing control of its own troops, this probably would not have occurred on any large scale.

Since mid-December, the USS MAINE had been held in readiness in Key West, Florida, to meet any crisis that would arise in Cuba. Lee had worked out a plan directly with Captain Charles Sigsbee of the USS MAINE. If Lee sent the message "two dollars", the MAINE was to be put on alert to be able to steam to Havana beginning within two hours. If Lee sent the additional message that "Vessels might be employed elsewhere," the MAINE was to proceed to Havana at once. The January riots had caused Lee to send the first of the two messages to Sigsbee.

Based on Lee's reports and urging to the U.S. State Department, McKinley finally decided to resume the naval courtesy visits to Cuba that had been stopped by his predecessor. Upon being notified of this decision, Spain, also responding to the tense international situation, stated that it would regard the naval visits as an unfriendly act. The U.S. State Department argued that it would be odd if the visits were not allowed, since the U.S. and Spain were, in fact, at peace. Spain accepted the proposal, provided that the Spanish naval vessel, VIZCAYA, would visit New York in response.

As time went by after the January 12, 1898 protests, Lee realized that the actions were not actually directed against the Americans. On January 24, 1898, Lee contacted Washington stating that a naval vessel would not be required at the moment and that more time should be allowed for the excitement of the protests to cool. At almost the same time, U.S. Secretary of the Navy, John Long, decided that the conditions in Cuba were now calm enough to resume the naval visits as agreed to with Spain. That same day the USS MAINE received her orders, and left Key West to steam toward Havana harbor. The vessel arrived at about 10:00 a.m., January 25, 1898.

Lee was surprised and a bit unnerved by the arrival of the USS MAINE. He had been notified by New York Herald correspondent, John Caldwell, that the MAINE would be arriving that morning. Lee refused to believe the news. Caldwell explained the source of his information. Caldwell needed cartridges for the revolver sent to him by the Herald, which were unavailable in Havana. He had wired the Herald's New York office stating "Camera received but no plates; please rush by next steamer." According to Caldwell, the Herald office decoded the message incorrectly, believing it to literally read "U.S. Consulate under attack." Caldwell mistakenly believed that this news was passed to Washington, and taken seriously. The response Caldwell received was "Send report Cuban cane crop. Want for main section.", which was decoded to state that the USS MAINE was being sent. Lee scoffed at Caldwell's news until, moments later, the firing of salutes indicated the MAINE's arrival. Caldwell reasoning of the chain of events triggering the MAINE's visit was incorrect, but his timing was impeccable.

The USS MAINE would never leave the harbor intact again. On February 15, 1898, massive explosions caused the vessel to sink in the muddy harbor bottom. On March 16, 1912, the stern of the USS MAINE was refloated, removed from the harbor andlaid to rest in the depths of the ocean. 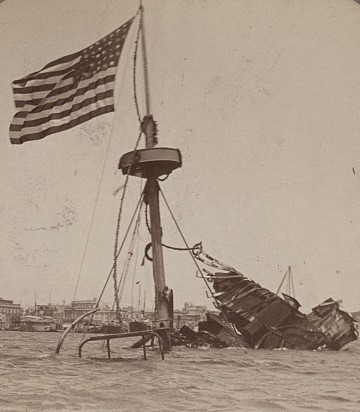 The wreckage of the Battleship MAINE in Havana harbor