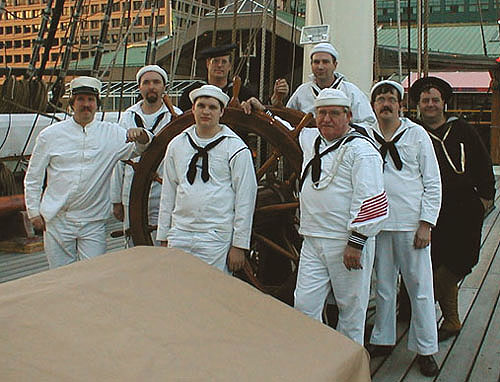 Members of the Living History Crew of the USFS OLYMPIA gather around CONSTELLATION's wheel.

The Living History Crew of the OLYMPIA was involved a presentation on the histroy of the U.S. Navy aboard the Sloop of War CONSTELLATION on October 26-27, 2002.

On October 26 and 27, the Living History Crew of the OLYMPIA had the honor of being asked to be present aboard the Sloop of War CONSTELLATION in Baltimore’s Inner Harbor to take part in  an event commemorating the history of the U.S. Navy.

The event was extremely interesting to the crew, as they were given the opportunity of staying aboard the venerable wooden warship. The first night aboard occurred on a very rainy night and the sound of the heavy rain and water running off the canvas was loud enough to be heard two decks below in the dry, but dark crew area. It seemed to be an added touch our realism and the sound of the water drowned out the traffic noise of the busy harbor area. The contrasts with our own OLYMPIA were quite striking, with some odd similarities thrown in for good measure. 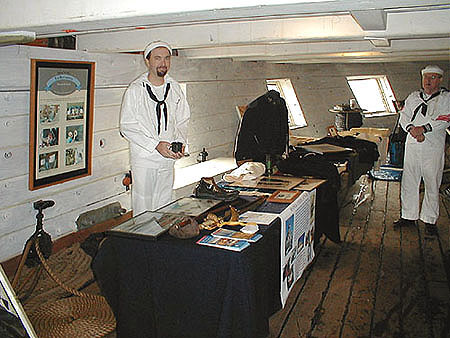 The days were new experiences also. The crew manned three tables of Spanish American War displays, joining other displays on the navy and marines in World War One, and World War Two. The Ship’s Company provided their own displays on the Civil War and War of 1812 eras navies as well as nursing in the navy. The crew also had the experience of meals aboard a ship in the days before the advent of the mess table. Breakfasts of oatmeal with molasses, nuts and raisins, and lunches of corned beef, pickles, figs, and other delicacies served on a mess cloth were enjoyed by all. 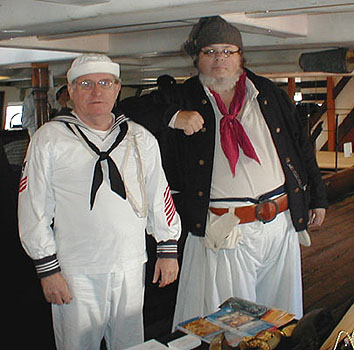 One of the most unique aspects of the weekend was the chance to visit with historians of the other eras of naval history, compare notes, and learn new aspects of the navy’s history. The Ship’s Company was found to be a delightful and friendly group of people with which to work.

The Living History Crew of the OLYMPIA extends their thanks to the members of the Ships Company and the CONSTELLATION for their hospitality on this very memorable weekend.

Return to Living History Crew of the USFS OLYMPIA Page