The History of the 3rd New York Volunteer Infantry 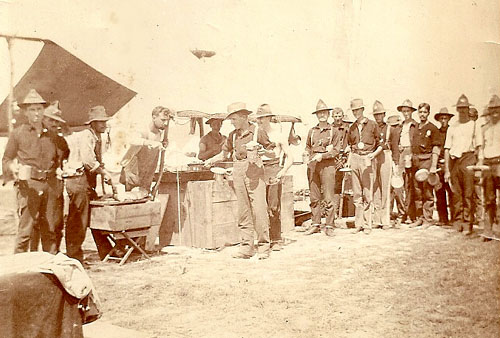 This photo is entitled "Uncle Ed Greenland at Mess"  Edward Greenland served with the 3rd New York Volunteer Infantry.
The family believes Mr. Greenland is the first man in the mess line.
Please Visit our Home Page to learn more about the Spanish American War

The following is a brief history of the 3rd New York Volunteer Infantry. The unit did not see service outside of the continental U.S. during the war.

The 3rd New York Volunteer Infantry was mustered into the federal service on May 17, 1898 at Hempstead, New York. At this time, it consisted of 45 officers and 972 enlisted men. Soon the unit was sent to Camp Alger, near Washington, DC, and was assigned to the First Brigade, Second Division of the 2nd Army Corps. The regiment remained at Camp Alger until August 3. On that date, it began a march to Thoroughfare Gap, Virginia and then  to Camp Meade, at Middletown, Pennsylvania. While the regiment was on the march, an armistice was reached between the U.S. and Spain on August 12, 1898, ending the war's fighting. The 3rd new York reached Camp Meade on August 29. The regiment was next moved to Elmira, New York, where it arrived on September 13, 1898. The following day, the regiment was given a thirty day furlough.

The unit was mustered out of service beginning on Novemer 30 and ending, ironically, on December 10, 1898, the day of the signing of the Treaty of Paris, officially ending the war. At muster out, the 3rd New York consisted of 47 officers and 1,222 enlisted men.

During its term of service, the unit lost 31 men to disease, with four more discharged on disability. The unit also lost one man to suicide. 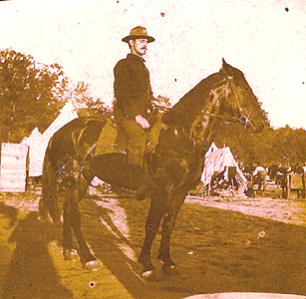 This is an image of Private Wayland Ayer Chapman sitting atop the colonel's horse. The image was taken at Camp Alger on July 18, 1898. Chapman was born on October 23, 1874 in Yates County, New York  He survived the war and married Dora Thayer Sutherland on August 20, 1907 in Topeka, Kansas. They had four children. Chapman died on November. 3, 1946 in Los Angeles, California.

Clerk of Joint Committee on Printing, The Abridgement of Message from the President of the United States to the Two Houses of Congress. (Washington: Government Printing Office, 1899). Vol. 3, map opposite p. 484.

Correspondence relating to the War with Spain And Conditions Growing Out of the Same Including the Insurrection in the Philippine Island and the China Relief Expedition. Vol. 1 (Washington: Government Printing Office, 1902) 606.

May, Roger Wayland (image and biography of Wayland Ayer Chapman)

Statistical Exhibit of Strength of Volunteer Forces Called into Service During the War with Spain; with Losses from All Causes. (Washington: Government Printing Office, 1899).