The Second New Jersey Volunteer Infantry served its term of service within the continental United States. It did not see service overseas.

The Second New Jersey Volunteer Infantry was mustered into service at Sea Girt, New Jersey between May 13 and 15, 1898, responding to President McKinley's first call for volunteers. At the time of mustering in, the regiment consisted of fifty-one officers and 979 enlisted men.

The 2nd New Jersey was sent to Jacksonville, Floridas Camp Cuba Libre, arriving n June 3. On its arrival, the regiment was assigned to the First Brigade, Second Division of the U.S. Armys Seventh Corps. The Seventh Corp, commanded by Maj. Gen. Fitzhugh Lee,  was being trained to invade Cuba. The Seventh Corps was never called to use its training, however, and remained in the United States. On September 2, the regiment was relcoated to pablo Beach, Florida. On September 22, the  regiment left Florida for Sea Girt, New Jersey. The regiment stayed at Se Girt until Octover 17, when it was ordered to Paterson, New Jersey

The regiment was mustered out of service on November 17, 1898 at Paterson, New Jersey. At the time of mustering out, the regiment consisted of fifty officers and 1,220 enlisted men. During its term of service, the 2nd New Jersey lost twenty-three men to disease, and had one man drown and one man desert. In addition, twenty men were discharged on disability. 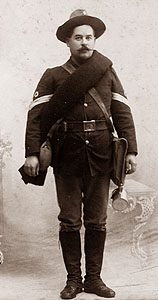 Sgt. John T. Collins of the 2nd New Jersey Volunteer Infantry, Co. L. This image was
taken in New Jersey, apparently after the return of the regiment.
The hat bears the insignia of the Seventh Corps

Clerk of Joint Comittee on Printing, The Abridgement of Message from the President of the United States to the Two Houses of Congress. (Washington: Government Printing Office, 1899). Vol. 3, 218-220.

Correspondence relating to the War with Spain And Conditions Growing Out of the Same Including the Insurrection in the Philippine Island and the China Relief Expedition. Vol. 1 (Washington: Government Printing Office, 1902) 605.

Statistical Exhibit of Strength of Volunteer Forces Called into Service During the War with Spain; with Losses from All Causes. (Washington: Government Printing Office, 1899).