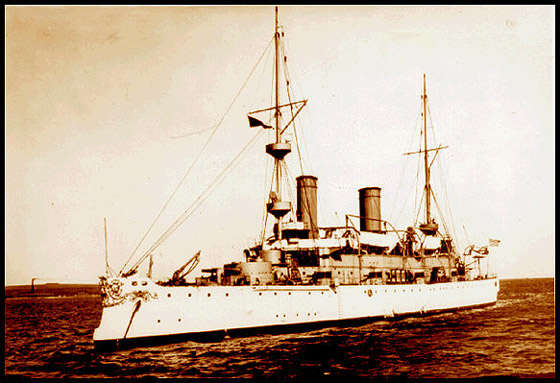 The USS OLYMPIA was the flagship of the Asiatic Squadron. It is the only naval vessel from the American Spanish-American War fleet still in existence. OLYMPIA is one of the most significant vessels in United States history as she was the flagship of Commodore Dewey in his victory over Admiral Montojo's Spanish Squadrin at Manila Bay. The United States took a large step towards becoming a world power with his victory.

The USS OLYMPIA was authorized on September 7, 1888. She was launched on November 5, 1892 with the breaking of a champagne bottle by Miss Ann B. Dickie. She was commissioned on February 5, 1895 and sailed from Mare Island to take her position as flagship of the Asiatic Squadron on August 25, 1895, under the command of Captain John J. Read.

On August 25, 1895, the USS OLYMPIA finally sailed from Mare Island to take her position as flagship of the Asiatic Squadron. In the three years prior to the arrival of Commodore George Dewey, the new Squadron commander on January 3, 1898, she visited ports in China, Japan, and the Philippines. The Winter was spent in Hong Kong Harbor. When War was declared on April 25, 1898, the USS OLYMPIA and the rest of the Asiatic Squadron sailed out of Hong Kong harbor, as required by neutrality laws, and sailed about twenty-six miles to Mirs Bay. She was now under the command of Captain Charles V. Gridley.

From Mirs Bay, the Squadron sailed for Philippines in search of the Spanish fleet. On May 1, 1898, The USS OLYMPIA led the Squadron in line of battle against the Spanish Fleet, opening the battle by saying "You may fire when ready, Gridley." When the smoke had cleared, the Spanish fleet had suffered a terrible loss in ships and men, whereas Dewey's squadron had only a few men wounded. Click Here for an account of the opening of the action by the pointer in OLYMPIA's after turret

After the battle, the USS OLYMPIA took part in the blockade and capture of Manila itself. On May 20, 1899 she pointed her bow back toward China, and then for Boston, United States, passing through the Suez Canal. On September 10, 1899, while in Gibralter, Dewey reported that he was allowing extra time for the Atlantic crossing, as one of the ship's screws was partially disabled. She arrived at Sandy Hook, New York, on September 26, 1899.

On November 8, 1899, the USS OLYMPIA was decommissioned for overhaul. She was updated, her torpedo tubes removed, her fighting tops were removed, hawsepipes relocated, and her bow ornament was replaced with ornate gilt scrollwork and figurehead, among other changes. She was recommissioned in 1902 and served as the flagship of the Caribbean. She found herself serving not only in the Caribbean, but also in the Mediterranean. In late May, 1903 OLYMPIA was in Guantanamo Bay, Cuba. On May 27 the joint U.S. - Cuban commission that was to define the boundaries of the new U.S. naval base at Guantanamo Bay held its first meeting aboard OLYMPIA, deciding the general procedures to be used to conduct the work. She was off Panama from December 1903 to March 1904. She sailed to the Mediterranean, serving off of Tangier in June 1904, and Smyrna, Turkey in August 1904. She then headed back to the waters of the Caribbean were she took up station off of Santo Domingo from May to December of 1905.

On April 2, 1906, USS OLYMPIA was again decommissioned at Norfolk, and then Annapolis. She was recommissioned for midshipmen summer cruises in 1907, 1908, and 1909. In 1910, the four 8 inch guns were removed along with their turrets, and a single 5 inch gun was mounted in each turret location. Two of the guns were sent to the Philippines for use in the armament of Corregidor. The other two were returned to Union Iron Works where they are now on display. On March 6, 1912, she was sent to Charleston, SC to serve as a barracks ship for the reserve torpedo group.

The USS OLYMPIA was recommissioned in 1916, as it became clearer that the United States would not be able to stay out of World War One. She became the flagship of the Patrol force Atlantic Fleet. During this time she was escorting convoys, and patrolling off of Nova Scotia. On April 28, 1918, the USS OLYMPIA sailed out of Charleston, S.C. bound for Murmansk to take part in the ill-fated Allied intervention against the Russian Bolscheviks. She joined the Allied force on May 28, 1918, and actually landed sailors to garrison Murmansk. She contributed approximately one hundred of her crew to join the forces that marched inland. Members of the OLYMPIA's crew also helped man the Russian torpedo boats KAPITAN YOURASOFSKI, and BESCHUMNI.

After the war, the USS OLYMPIA set her bow toward Portsmouth, England and then into the Mediterranean. She cruised in the Adriatic from January 21 to October 25, 1919. She broke away briefly to aid refugees in the Black Sea. In September she again left her station in the Adriatic to land forces to prevent actions between the Yugoslavians and the Italians at Trau.

Finally, on November 24, 1919, she returned to the United States, arriving in Charleston, S.C. on November 1919. She left for the Adriatic again from New York on February 14, 1920, returning to the U.S. through Philadelphia on May 25, 1921. The USS OLYMPIA again became the flagship of the Atlantic Fleet.

In July, 1921, General Billy Mitchell performed his demonstrations to attempt to prove the value of airpower by sinking the old German battleships FRANKFURT and OSTFRIESLAND off of Virginia. The USS OLYMPIA took part in the experiments which proved the value of airpower, a factor that would have such a strong influence on the future of naval and land warfare.

On October 3, 1921, the USS OLYMPIA again departed for Europe. She had been sent to LeHavre to return the remains of the American Unknown Soldier for burial in Arlington National Cemetery. She began her last Atlantic crossing on October 25, 1921, under the escort by a group of French destroyers for part of the way. During the crossing, she passed through a gale which caused the ship to heel over thirty-nine degrees! Some feared she would capsize. She was met at the mouth of the Potomac, where she arrived on November 9, by the USS NORTH DAKOTA (BB-29) and the USS BERNADOU (DD-153) for the cruise to the Washington Navy Yard. Here, with honors, the remains were returned to be placed in American soil.

During the Summer of 1922, the USS OLYMPIA was used for a training cruise and then decommissioned for the last time, on December 9, 1922 in Philadelphia. The vessel was reclassified as the IX-40 on June 30, 1931.

On September 11, 1957, after several years of effort, the USS OLYMPIA was officially transferred to the Cruiser Olympia Association. Over the years, the Association found itself unable to keep abreast of the costs of upkeep for the vessel. In January of 1996, the vessel was transferred to the Independence Seaport Museum. Presently the Museum is beginning the long trek to restoring the vessel, beginning with minimizing dangers to the vessel, such as fire and water leakage. Restoration is ongoiong.

The USS OLYMPIA is permanently docked at Penn's Landing in Philadelphia, and is open for public viewing. It is the only American warship from the Spanish American War still in existence, and one of only four warships representative of the time period that exist worldwide.

The USS OLYMPIA was an all around well-designed and well-built vessel for its size, capable of delivering a broadside of 1,250 pounds of projectiles. However, the British considered the USS OLYMPIA over-engined and over-gunned. These two items appeared to actually have been advantages.

The main battery of the vessel was enclosed in full turrets, the only protected cruiser to have full turrets.

The ship was lightly armored, which, in the rapidly evolving world of naval ordnance, put the ship at risk. The cofferdams with cellulose, thought to be useful as a self-sealing armor, were found to be ineffective. Lastly, the use of coal bunkers as additional armor around the ship's vitals, such as the engine rooms and magazines, created a potentially dangerous situation. A fire in coal bunker could result in the explosion of a magazine, as may have been the case in the loss of the MAINE.

The main disadvantage of vessel had little to do with the USS OLYMPIA itself, but with the explosive growth of international navies. Rapidly, the USS OLYMPIA, not a large vessel initially, was outsized and outgunned by the newer vessel shortly plying the oceans, including the US's own battleships MAINE, TEXAS, OREGON, INDIANA and MASSACHUSETTS.

Clerk of Joint Comittee on Printing, The Abridgement of Message from the President of the United States to the Two Houses of Congress, Washington: Government Printing Office, 1899. Vols. 2, 4

Return to US Navy
Return to Main Page