By Patrick McSherry and MarioValdivieso 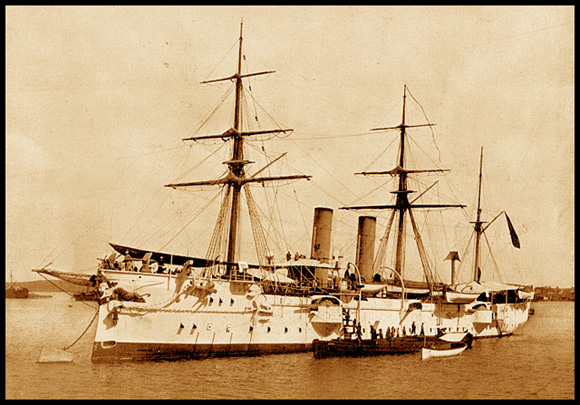 Please Visit our Home Page to learn more about the Spanish American War Click here for an artist's rendering of the ALFONSO XII attacking Cuban Insurgents
Other views of the ALFONSO XII:
Broadside View ||| View in drydock

The disabled Spanish cruiser ALFONSO XII was located in Havana harbor when the battleship MAINE arrived. When explosions shattered the MAINE sending it to the bottom of the harbor, some crewmen thought that the ALFONSO XII had opened fire on the ill-fated ship. In fact, it was the crew of the ALFONSO XII who were among the first on the scene to begin rescuing the American sailors from the waters of Havana harbor.

The ALFONSO XII, an unprotected cruiser, was launched on August 21, 1887.  She and her sister ship, the REINA CRISTINA (lost in the Battle of Manila Bay) were the first steel cruisers constructed at the Spanish Naval Shipyard at Ferrol. The vessel was commissioned four years later in 1891 under the direction of managing engineer Andres Comerma. Her naval architec was Tomas Tallerie. Her other sistership was the REINA MERCEDES.

By 1897, she was in Havana harbor. She was not in a seaworthy condition. Her boilers required a major overhaul, and some of her guns were removed to be used in the harbor fortifications.

When the battleship MAINE  arrived in Havana harbor in January 1898, her captain, Charles Sigsbee asked the harbor pilot for the ALFONSO XII's berth, believing that this berth must be free of mines. The pilot had to inform Sigsbee that this was not possible, since the Spanish vessel was incapacitated. The MAINE  was moored two hundred yards away from the ALFONSO XII. The MAINE  fired a salute to the pennant of Admiral Vincente Manterola which flew from the halyards of the Spanish vessel. The ALFONSO XII was commanded by Manuel Eliza.

When explosion destroyed the MAINE , the ALFONSO XII crew immediately went to the aid of their brother sailors, rescuing many from the waters and taking them back to the Spanish vessel to be treated in its sick bay. In the following days, crewmen from the Spanish vessel helped stand gaurd over the sunken hulk, warding off souvenir hunters, and, unfortunately, some of the MAINE  officers who were not recognized in their civilian clothes. Later, the crew of the ALFONSO XII took part in the funeral services for the MAINE  crewmen in Havana, marching in the funeral cortege.

The vessel remained in Havana throughout the war. She was returned to Spain after the war and placed out of commission in 1900.

The vessel was an unprotected cruiser, meaning that she was unarmored. This combined with her lack of mobility, allowed her to serve only as a floating battery. She played only a small role as the war did not center on Havana. Her speed never met the level intended.